Tote to be sold to Betfred for £265 million
http://www.culture.gov.uk/news/news_stories/8187.aspx 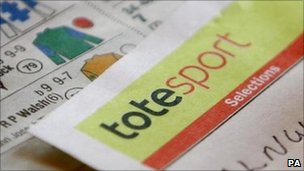 Governments have been trying to privatise the Tote for 14 years


UK-based bookmaker Betfred has been chosen to buy the Tote after an auction process that began in November.

Betfred, which is paying £265m, said it would look at ways of exploiting the public body's commercial potential.

Horse racing will receive £90m from the sale and £90m will go to the taxpayer.

Betfred will take over the Tote's monopoly on pool betting at 60 UK racecourses and online, and will rebrand the Tote's 517 High Street outlets under the Betfred name.

As part of the deal, Betfred will keep exclusive control of the pool betting system on UK racecourses for seven years.

In return, it has committed to paying the racing industry £11m to March 2012, with payments of £9m a year for the next six years of the licence.

But there have been warnings that changes to the way that money is distributed could threaten the number of racetracks in the UK.

"We've got 60 racetracks. What happens is the Tote basically subsidises the smaller tracks because the money the Tote makes on any particular day is shared between all the tracks," racing journalist Neil Clark told the BBC.

"That's under threat so I fear that in, say, 10 years' time we'll have a sort of Premier League system and some of the smaller tracks will close down, which would be a great shame."

But Barry Nightingale, Betfred's finance director and the man who led the bid, said the firm was committed to the industry for the long term.

"We're investing in the Tote, we're going to be engaging with racing to create a lasting legacy and we will be involved in running the Tote for a long, long time," he said.

Betfred executive chairman Fred Done added that after the seven years were up, "there's no reason why this can't go on forever".


J MARGARET CLARKE TURFCALL
GOVERNMENT COULDN'T CARE LESS ABOUT THE PEOPLE WHO GO OUT TO WORK EACH  DAY.

ALL THOSE WHO WORK FOR BT ARE ONLY KNOWN BY A NUMBER.